At the Forefront of Extinction - Global Frog Populations

The unprecedented rate of decline for frog populations worldwide is one of the most significant environmental problems of the 21st century. Reasons include the individual or synergistic effects of key drivers such as habitat destruction/modification, infectious disease, pollution, overexploitation for food and trade (pet and lab use), invasive species, and climate change. Frogs are one of the oldest vertebrates to settle on land from the water nearly 300 million years ago however they need habitats to survive. Ecologically, frogs hold a crucial position on the food web as they are an essential diet of many animals while they check the unwanted population of ticks, flies, mosquitoes, and disease-borne vectors. Frogs are very critical to pollution in aquatic communities as their moist skin quickly absorbs anything within the contact of water and scientists call them bio-indicators of the environment. It’s a matter of shame for the entire human race how such historically robust and resilient species are disappearing rapidly due to our irresponsible actions, and currently, one-third of the global amphibian species (7,899) are threatened with severe risks of extinction. 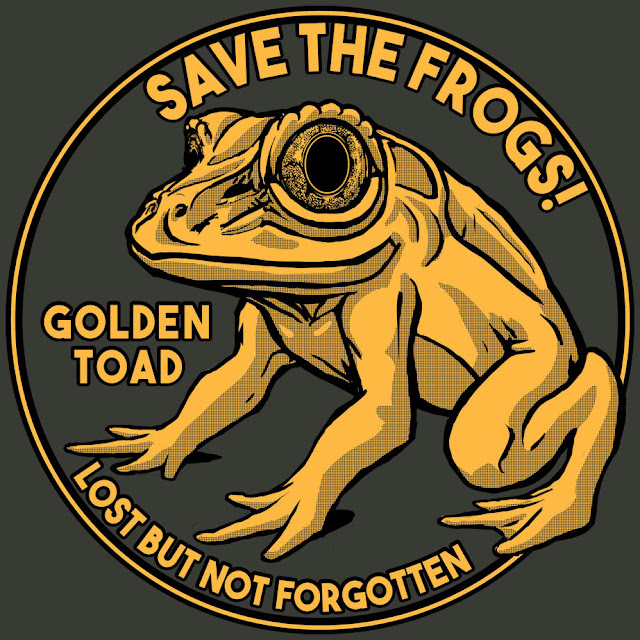 Starting in 1995, cases of malformed frogs and missing limbs caught scientists’ attention in Minnesota and on the shores of Vermont’s Lake Champlain. Following that, mass abnormalities came into the limelight in the United States and Canada. Scientists’ noted that pollutants had lethal to sub-lethal impacts on frogs leading to suppressed growth and development while making frogs vulnerable to the emerging diseases. The consequences were noticeable when mostly frog habitats were exposed to wastewater pollutants, especially nitrogenous chemicals from farmlands.

An infectious disease called Chytridiomycosis, caused by the chytrid fungus (Batrachochytrium dendrobatidis), is wiping out frog populations from the global map more than ever with the incidence reported in all six continents and over 40 countries. Chytridiomycosis has been detected as far north as Alaska and as far south as Tasmania, as high as 5348 meters and as low as nearly sea level. The disease has already put 200 species of frog to extinction until now, in less than 30 years of its discovery. Scientists trace back the emergence of chytrid fungus in the late 1930s when African clawed frogs were shipped globally for research and used in pregnancy testing. While there is a lack of evidence on how chytrid fungus propagates naturally across geographies, a vast portion of the infected frogs is reported from the frog trade industry. Frogs are exported heavily from China, Indonesia, and other Asian nations to meet the global demand of frog leg’s consumption, for educational and scientific purposes.

It is apparent now that the Earth’s climate is changing in response to anthropogenic greenhouse-gas emissions. The average annual global temperature has risen by 1°C since the last century and expected to grow 1.5°C by 2040 (IPCC report). The rate of increase has been highest in the latter part of the century. The effects of escalated temperature can alter oxygen uptake, mating cycle, inhibit development and metamorphosis, induce tadpole mortality, and sex reversal in frogs. The temperature increase will also affect distributions of species seeking higher elevations. Alterations in precipitation patterns have apparent negative consequences seen in shrinking breeding habitats and delay in reproductive behaviors. Even excess rainfall is detrimental to frogs that are dependent on aquatic habitats with the lesser flow. The large scale impact of these changes will have implications on the food web structure and even interactions between species in the community. Species like American Bullfrog and Cane Toad are a severe threat to all native amphibians around the globe because of their easy dispersal capability anywhere in the world. These invasive species compete with the native populations for shared resources and wipe out them quickly off its natural habitat.

While frogs are being pushed to the brink of extinction, we can still help them out and reverse the decline that requires a trade-off between environmental, economic, and social pillars of growth. Infrastructural development like roads in the vicinity of frog habitat, could fragment populations and even facilitate the spread of invasive species by disrupting native communities and changing physical habitats. Therefore, environmental consideration should be taken while planning road development. Levels of pollution and pesticide use should be controlled in farmlands and runoff in pools/streams/creeks as exceeding levels have dire consequences in frogs. The disease management programs should be regularly monitored and significant learnings have to be incorporated eventually. The trade of live/dead specimens for food, pet and scientific purpose needs to be regulated at the regional, national and global levels by enforcing regulations that are already in place. A well-defined frog conservation action plan has to be a part of a broader national conservation effort and integration of outreach programs to the general public. 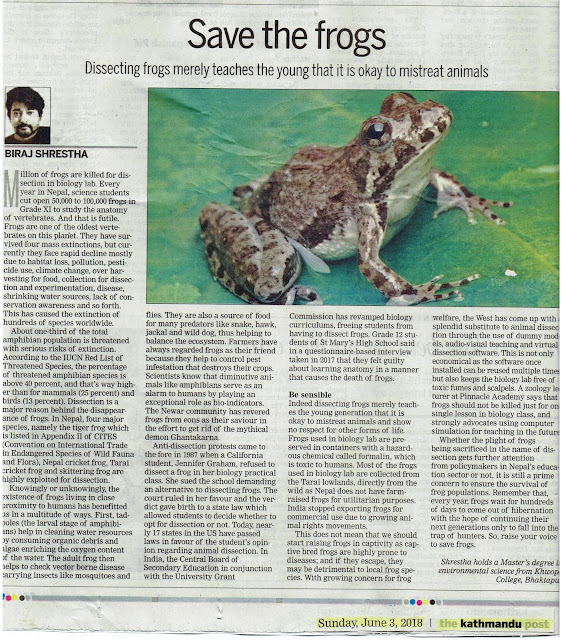 Amphibians are cold-blooded animals divided into three orders: Gymnophiona, Caudata, and Anura. All frogs and toads fall under Anura. The total number of recognized species has increased by over 60% since 1985. In Nepal, there are 53 species of amphibians (1 newt, 4 toads, 47 frogs, and 1 caecilian). Over 2,000 amphibian species are threatened with extinction i.e., one-third population and about 200 species have already been extinct since 1979. Amphibians play a significant role in the functioning of the ecosystem. Amphibian populations have suffered widespread declines and extinctions in recent decades. The amphibians of Nepal have been facing severe threats of extinction mainly due to rapid deforestation, soil and water pollution, land-use changes, habitat loss, unsustainable collection for food, medicine, and exploitation in the academic sector. However, the major driver of the decline is the lack of awareness in people about the importance of amphibians. So, every year on the last Saturday of April since 2008, the amphibian admirers in different parts of the world celebrate “Save The Frogs Day” with the primary aim to protect amphibians and encourage the public to respect nature and wildlife. 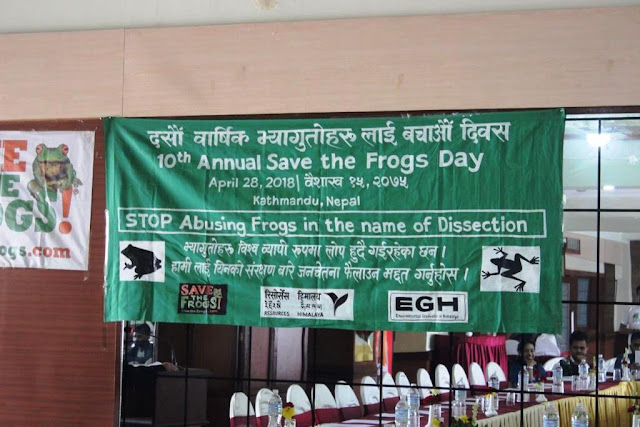 This year the 10th Annual Save The Frogs Day was marked in Nepal on 28th April at Indreni Food Land, New Baneshwor, Kathmandu, with the financial support from SAVE THE FROGS! USA, Resources Himalaya Foundation and Environmental Graduates in Himalaya (EGH). We picked the issue of frog dissection practice in biology labs across the country. The event had wider participation of college and university students, zoology teachers, conservationists, academics, and media persons. Mr. Biraj Shrestha, Research Officer at Resources Himalaya Foundation (RHF) and SAVE THE FROGS! volunteer was the event coordinator and supported by volunteers from EGH. 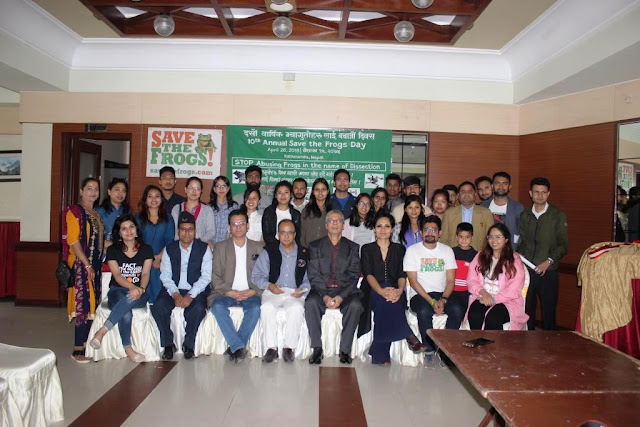 ACTIVITIES
The program started with a welcome note by Ms. Binita Pandey, Research Assistant at RHF, following a short video clip playing about amphibians' decline. After that, Mr. Biraj Shrestha, Research Officer at RHF gave keynote presentation on the topic titled “The Downside of Frogs Dissection”. He highlighted the importance of frogs, their role in the ecosystem and the decline of frogs due to several threats. He further stressed how dissection could cause a decline in frogs and condemned it futile. There are alternatives that could be scaled in Nepal to avoid killing frogs for anatomy teaching in biology classes. 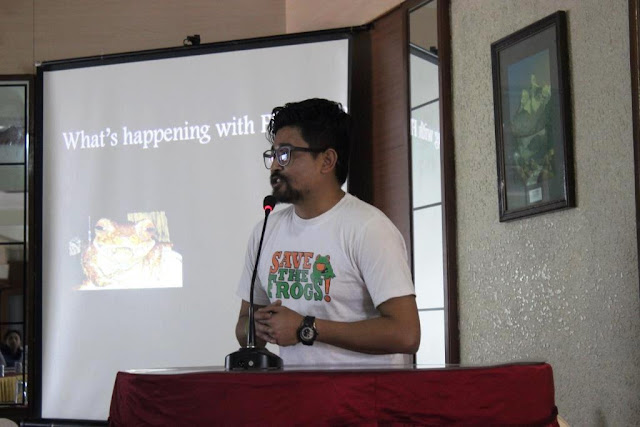 During the interaction, Mr. Khubi Ram Adhikari, Deputy Director of the Curriculum Development Centre, assured that it’s high time to revamp the curriculum and apply the substitutes if possible. Mr. Rishi Shah, Academician of NAST, expressed his view about the frog’s day and its importance. He highlighted the need for collaboration among people and institutions to address such overlooked issues in conservation. Mr. Shailendra Pokharel, Executive Chief of CODEFUND, recalled his colleague Dr. Kaluram Rai's experience who'd collect an army of stream frogs, paha during his Ph.D. fieldwork days. 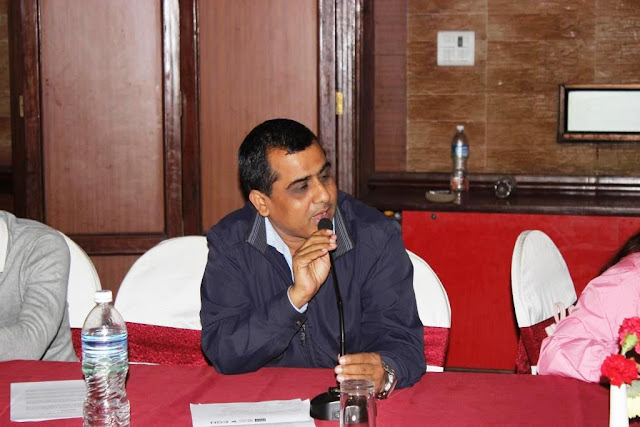 Ms. Shristi Singh Shrestha, Project Manager of The Jane Goodall Institute, expressed her sincerest support to end frogs abuse in the name of dissection. Ms. Shrestha who's been advocating relentlessly for animal welfare issues across the country released the dissection awareness poster "FROGS' Dissection is Futile! Stop Threatening Their Survival!" 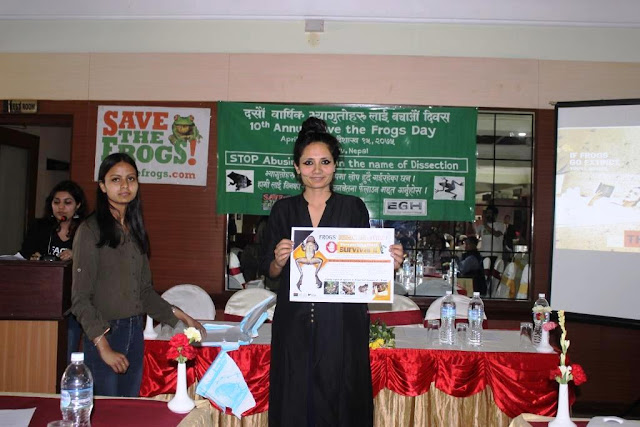 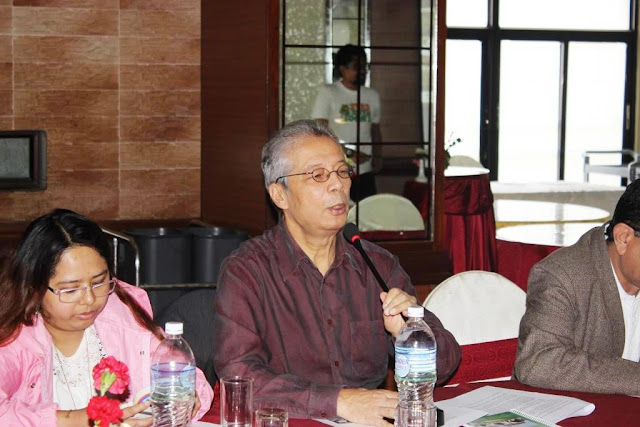 Dr. Dinesh Raj Bhuju, General Secretary of RHF, delivered concluding remarks about the evolution of frogs, their role in the ecosystem, shortcomings of dissection while urged to adopt alternative measures to dissection on the grounds that modern education is misled by exploiting frogs in high school biology classes. 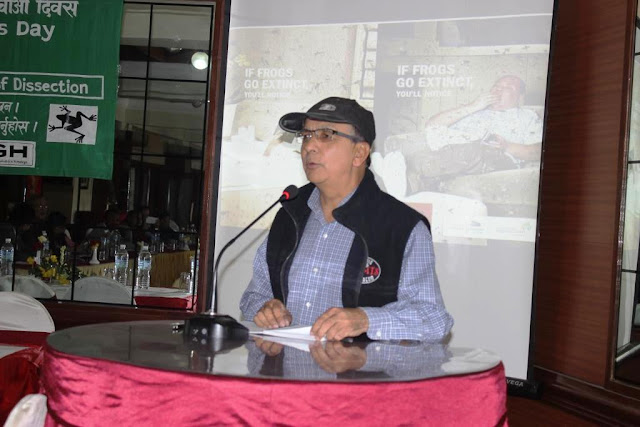 At the Forefront of Extinction - Global Frog Populations